We know that lasers are very accurate instruments and emit a very precise wavelength and hence are in an array of precision applications including bloodless surgery, eye surgery and fingerprint detection. So why do we see random light/dark spots when we shine a laser on anything? Shouldn’t it all be the same color since lasers are deterministic (read: not random)? To answer that question, we need to delve into optical theory.

Coherent optical systems are simply defined to be deterministic systems. That’s a big definition, so let’s break it into pieces. Coherent systems are where you know the wavelength and phase of every ray. Lasers are very coherent (one wavelength, same phase) while sunlight is not coherent (many wavelength, different phases).

Deterministic is just a way of saying everything about the system is known and there’s no randomness. Sunlight is not deterministic because there are many random processes. Photons are randomly generated and there are many wavelengths. Sunspots are one example of the randomness present in sunlight.

But if lasers are coherent and deterministic, why do we see speckle (read: bright and dark spots) when we see a laser spot? The speckle is random; we can’t predict where every dark spot will be. The randomness of this laser spot and the fact that lasers are deterministic throws a helluva question at us. It turns out what we see the laser on is important, but let’s look at the math and physics behind it.

Coherent optical systems have a very special property. Their impulse response (read: reaction to a standardized input) in the frequency domain is just the pupil function. For those familiar with the parlance and having $f_x$ be a spatial frequency as opposed to a time frequency,

When I saw this derived1, I thought “holy (expletive).” If you just want to only pass high frequency spatial content (read: edges), then all that’s required it to not let light through the center of the lens. 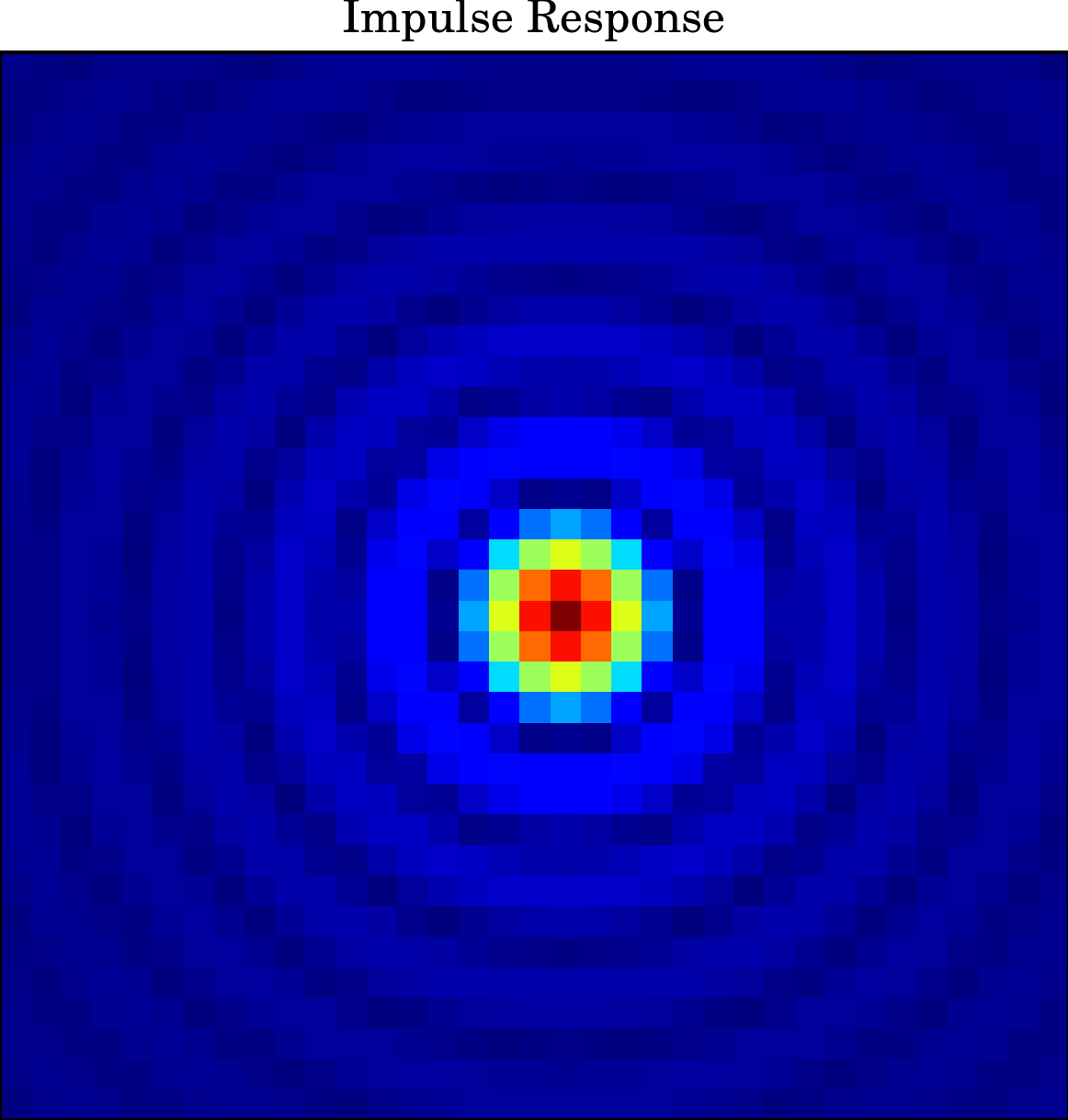 Since this system is linear, we can think of our output as bunch of impulse responses shifted in space and scaled by the corresponding amount. This is the definition of convolution and only works because this is a linear and space invariant system.

Through the angular plane wave spectrum, this impulse response can be viewed as a series plane waves coming in at different angles, shown in the figure below. 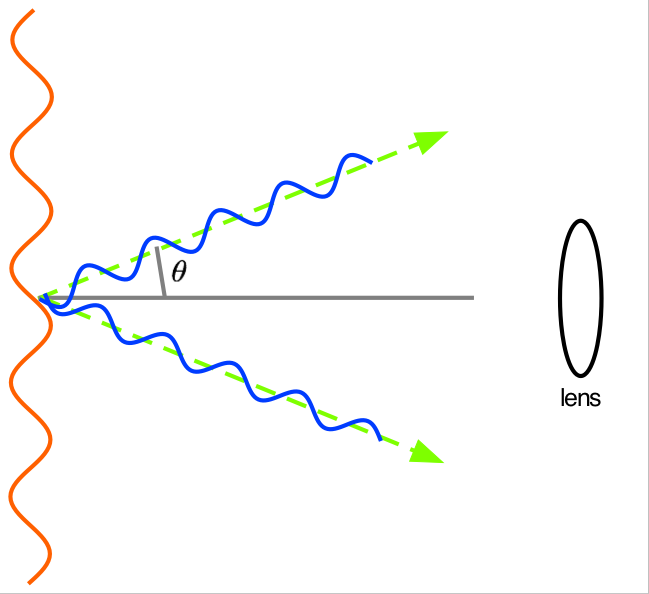 What angles can a wave be thought of as? The frequency content and angles turn out to be related, since two planes waves of a constant frequency adding together can have a change in frequency depending on what angle they’re at, which makes intuitive sense. Or, our spatial plane wave $U(x,y)$ can be represented by the Fourier transform:

The wall which the laser is shining on is not smooth and perfectly flat. It’s rough, and the distance adds a phase difference between two waves2. Through the Drunkard’s Walk and the angular plane wave spectrum, if we could obtain every angle, the laser spot wouldn’t have any speckle. Our eyes are finite in size, so we can’t obtain every angle or frequency.

The laser spot y shows some speckle! The speckle varies with how large we make d (really delta but that’s long); if we include more frequencies and more of the impulse response, the dots get smaller. To see this, if you hold a pinhole up to your eye, the speckles will appear larger. 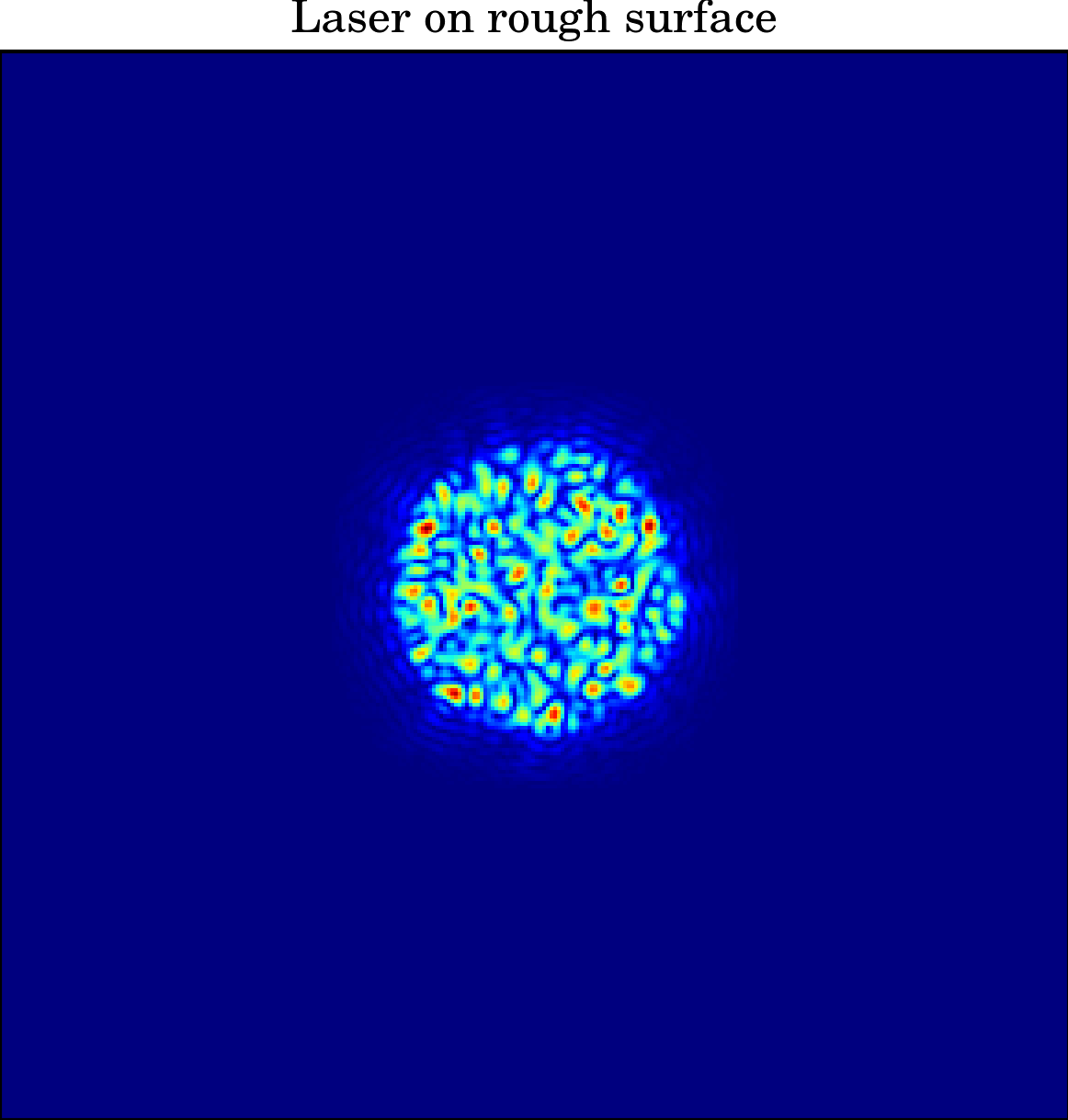 An intuitive way to think about this involves the impulse response. The impulse response changes on with the distance and so does the phase. Certain areas add up to 0 while others add up to 1. There’s a whole probability density function that goes with that, but that’s goes further into optical and statistical theory.

tl;dr: the roughness of the walls add uncertainty in phase and hence speckle