I recently had to compute many inner products with a given matrix $\Ab$ for many different vectors $\xb_i$, or $\xb_i^T \Ab \xb_i$. Each vector $\xb_i$ represents a shoe from Zappos and there are 50k vectors $\xb_i \in \R^{1000}$. This is computation took place behind a user-facing web interface and during testing had a delay of 5 minutes. This is clearly unacceptable; how can we make it faster?

I spent a couple hours trying to get the best possible performance from my functions… and through this, I found a speed optimization1 that put most of the computation on NumPy’s shoulders. After I made this change, the naïve for-loop and NumPy were about a factor of 2 apart, not enough to write a blog post about.

We know that matrix multiplication has computational complexity of something like $\bigO{n^{2.8074}}$2, but very likely greater than $\bigO{n^{2.375477}}$3 when multiplying two $n\times n$ matrices. We can’t get around this without diving into theory, but we can change the constant that dictates exactly how fast these algorithms run.

The tools I’ll test are

I had planned to test other tools but these tests didn’t pan out for reasons in the footnotes. My test script can be summarized in the appendix, but I saw that the GPU offered significant speedup with the following graph:

Under the default Anaconda environment (i.e., with MKL), we see that our script runs 80% slower without MKL and has a 14x speedup under cudamat!

Accelerate and scikit-learn are both fairly similar. In choosing whether to use Accelerate or scikit-learn, there are two obvious tradeoffs:

Whichever is chosen, large speed enhancements exist. I have timed a common function (fft) over different values of n; there is some overhead to moving to the GPU and I wanted to see where that is. I provide a summary of my testing script in the appendix. 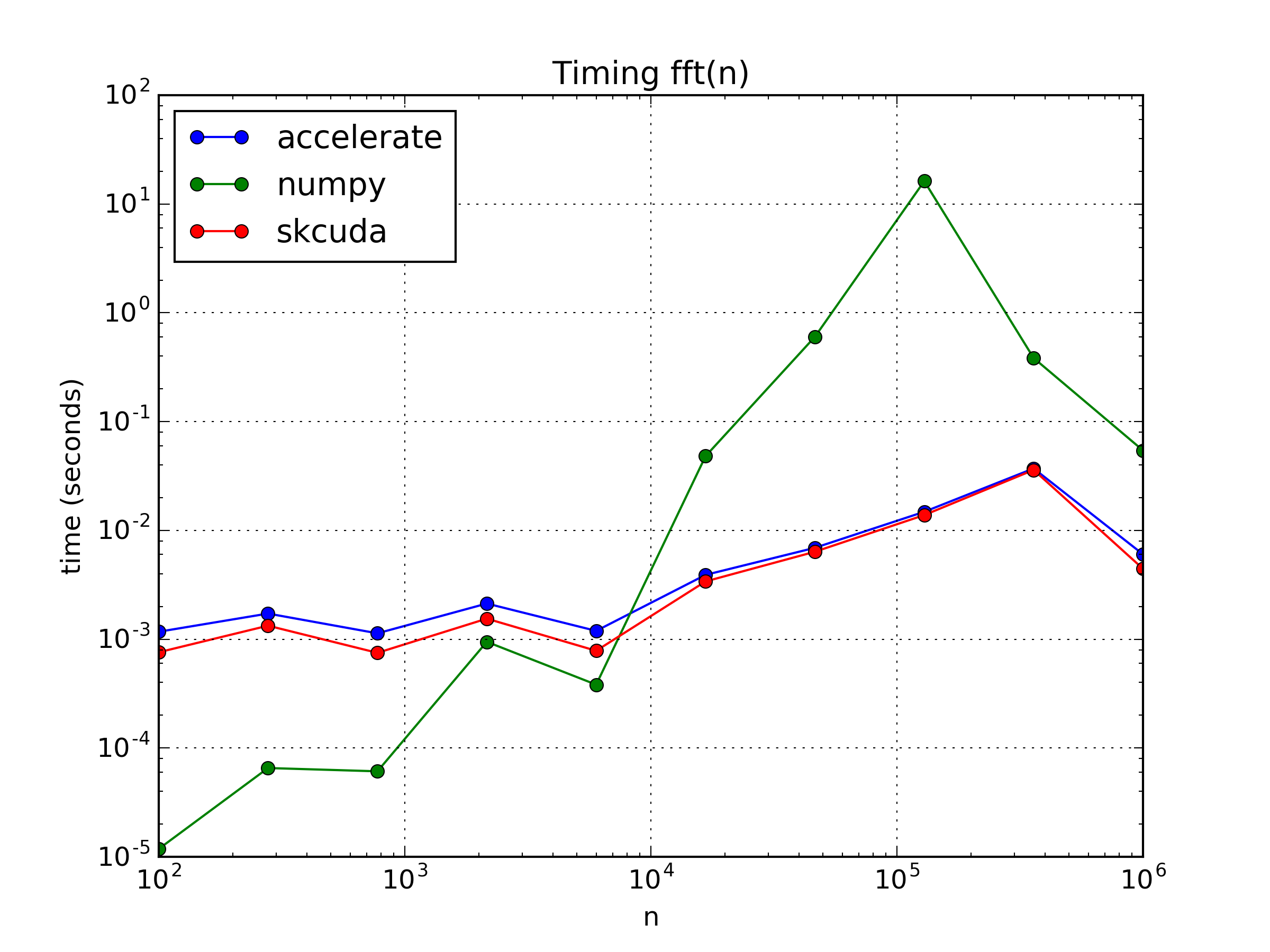 Anaconda has published a good overview titled “Getting started with GPU computing”. I think I would start with Numba: it has debugging and supports some notion of kernels. [updated 2017-11]

CuPy tries to copy NumPy’s API, which means that transitioning should be very easy. I mean, they even have a page on “CuPy and NumPy Differences”. But, they also offer some low level CUDA support which could be convenient. It looks like Numba support is coming for CuPy (numba/numba#2786, relevant tweet).

Numba supports defining GPU kernels in Python, and then compiling them to C++. This is a powerful usage (JIT compiling Python for the GPU!), and Numba is designed for high performance Python and shown powerful speedups. More advanced use cases (large arrays, etc) may benefit from some of their memory management. Numba does have support for other lower level details (e.g., calling the kernel with different threads/block sizes).

PyTorch is useful in machine learning, and has a small core development team of 4 sponsored by Facebook. It’s what I (a machine learning researcher) use every day, and it’s inspired another blog post, “PyTorch: fast and simple”. It’s API does not exactly conform to NumPy’s API, but this library does have pretty good support (easy debugging, nice NumPy/SciPy integration, etc).

Other less popular libraries include the following:

…and of course I didn’t optimize any loop-based functions. To do optimize loop speed, I would look at numba first and then possibly Cython.

In this script, I show preparing for the FFT and preparing for linear algebra functions (e.g., cilinalg.init()). I found that it’s useful to look at the scikit-cuda demos.